Discuss the advantages and disadvantages of your favorite breed.
Post Reply
1503 posts

Took some pictures of our fall bulls. I think they are coming along nicely!

This is an October Optimizer x Shear Force cow; Here is Ron's Iron Hide x Rocking P cow in the front, and the Sept Optimizer x Summer Sister bull we have shown twice, both times Reserve Champ Simm bull. He weighs close to 1100 now! He would pass a BSE with no problems at this point! These are both Optimizers; the one in front grazing is October born This is a late October Upperclass x Zsa zsa, so flush brother to the heifer that has been winning for our daughter We have a few more, but I did not get pictures. It was such a nice morning, and the boys looked good, so I took my phone out to take a few.

Kris: just some info on my bull:
Here is Ron's Iron Hide x Rocking P cow in the front.

Nesikep wrote:Since we time travelled a backward a little here on CT, I gotta repost this
Hector has been a busy boy
[youtube]https://youtu.be/XpuD6h8-pU8[/youtube]

Thanks for posting. I like Hector. Nice bull.
"Looking for an honest man".
Diogenes.
Top

Those are some impressive gains Ron.
Top

Those are some impressive gains Ron.

Those are some impressive gains Ron.

I snapped this picture the other day of my NBAR Hamley son, JFCC Silverado. I really like the way he is maturing and carried more than enough condition through winter on hay only. I only wish his chest floor was a bit higher.

Boot Jack Bulls wrote:I snapped this picture the other day of my NBAR Hamley son, JFCC Silverado. I really like the way he is maturing and carried more than enough condition through winter on hay only. I only wish his chest floor was a bit higher.

Why do you say you wish his chest floor a bit higher? He seems to have plenty of air under him and that would reduce his depth.

Ken, he's actually a bit heavy in his brisket considering he is only a frame 5.5 bull. It doesn't show in this picture, but his is a touch front heavy for my taste. I personally don't like a bull with a brisket between his knees, no matter the age. I prefer natural depth of rib and muscle carried low on the gaskins and fore arm. I love this bull, and his calves are phenomenal, but his brisket is the one area I would change him.
Boot Jack Cattle LLC & Boot Jack Boers
Top 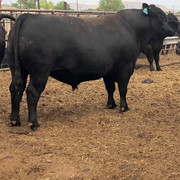 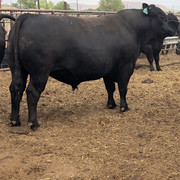 You made a very good purchase.
Making Cattle Today Great Again!
Sometimes you do have to throw out the babies with the bath water.
Top

Here is some worthless advice. The cattle business is at the point where there is so much Angus that the majority of the US herd will grade Choice.

So everybody has the same cattle. The future is about raising proven GENETICS that will grade Prime with Yield Grade 3. If you are just raising cattle you can't beat a $1500 bull as long as he gets the job done. If you are raising GENETICS then we can't tell you much about the bull. For all we know he could be taking you further away from where you need to go.

The trick is taking the proven genetics and culling ruthlessly until you get a herd that works in your situation.
Top

I catch what your saying. I think genetics makes more money than beef. Maybe I should re think this
Top

Lrj505 wrote:I catch what your saying. I think genetics makes more money than beef. Maybe I should re think this

Return to “Breeds Board”