kenny thomas wrote:Notice that it is all rifles and shotguns but can't see an assult rifle in the picture. 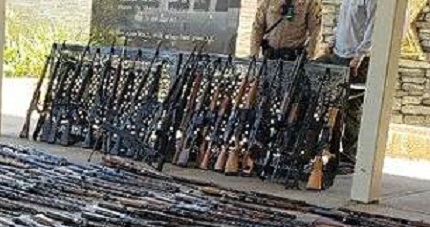 A USAToday news article said he was charged:

Being Calif tho, there's no telling what their definition of an 'assault rifle" is nowadays. Might be just any .22 semiautomatic or 12 ga autoloader....

I think your right. But it's a wonder they didn't call them all assault rifles.

Some of the old military stuff I see there on the floor might have been 'assault rifles' back in their day....back when assaults were made with bayonets fixed and horizontal butt strokes...

"For evil to flourish, all that is required is for good men to do nothing" Burke
Power corrupts. Absolute power corrupts absolutely.
It ain't easy being a used cow salesman.
Top
Post Reply
16 posts